Things My Grandmother Taught me

Well, it's been a while, hasn't it? A bout of pneumonia (brought on by allergies) and preparing for classes at Letters of Joy and Bellevue Art & Frame, and Clay Camp with the Northwest Polymer Guild kinda took up my time, and I have some catching up to do!

The grandmother of the title is, of course, Bam Bam. I know I've mentioned that I lived with Aunt Quail and Bam Bam several times while I was growing up, including my last semester of High School. So I had many opportunities to observe--and collect, if only in my memory--her wit and charm, and her wisdom.

She was fond of quoting aphorisms, lines of poetry and plays, and of making her own observations. There were three she repeated often; one was a quote from Shakepeare's King Lear, one was her own creation, and one was an old Chinese proverb.

"How sharper than a serpent's tooth it is to have a thankless child," King Lear says of his daughter Cordelia, who is the only one of his three daughters who loves him and wants him to live long and prosper. Bam Bam quoted this at me whenever she felt I was not toeing whatever line she had in mind. Often I hadn't a clue what line was not being toed. And when I did have a clue, half the time I had no idea why that particular line needed toeing. But that was Bam Bam: an enigma wrapped in a mystery wrapped in whatever aspect of her fascinating self she chose to reveal.

"T'was greed killed the yellow snake that tried to eat the sun," Bam Bam would say, whenever she felt someone was trying to take too much of what she considered our common heritage, be it money, political clout, or property. The Chinese proverb appeared in a footnote of a book I was reading--I don't remember the book now--which I had found in the bookcase. She had apparently read the same book.

"Fear is the enemy," she would tell me, inclining her head wisely. She was writing a book about John Wesley at the time. He was the founder of Methodism. I don't know why she was writing about him, or what happened to her manuscript. It may be among her papers in the Bancroft Library at the University of California. Anyhow, Bam Bam went on to tell me that most of the baser emotions like hate, anger, and bigotry are founded in fear, and if one could be rid of fear, things would be a lot better. She was thinking of using "Fear is the Enemy" as the title of her book. I have always remembered her telling me that, and the older I get, the more obvious it becomes. In the words of FDR, "We have nothing to fear but fear itself."

A year or two ago I was looking through a bookcase in the downstairs "library" and came across The New English Bible New Testament published by Oxford Cambridge. I was going to refile it next to the Septuagint, thinking they might be related, and flipped it open. Inside the cover was the pencilled inscription in Bam Bam's unmistakeable handwriting, "From Anthea 1965." Further investigation revealed the book to be a "dummy," a book made to test the size and binding of the finished book, but with limited text. This dummy included everything up to the first page of the introduction, and after that the pages were blank. Bam Bam used these pages as a sort of journal of wit and wisdom, writing, beginning in 1966, some of her more observant thoughts.

"Boredom is ingratitude to God."
"All mental disturbance is caused by concentration on Self."
"Craziness is selfishness to the N-th power."
"Only the childless truly value children."
"Only the pure know passion." 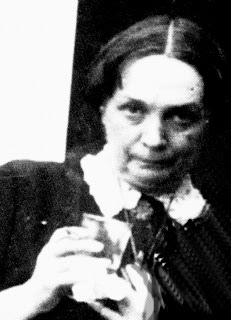 "Alcohol before 60 is not needed. Afterwards it is a new life,"

Bam Bam was very moral, and a devout Episcopalian. She made some notes at the very back of the book, observations about Jesus, which she titled "Human attributes of Christ." They seem to be the distillation of much thought on the subject.

"Need of friends
'Sought after dinner guest.'
The bitter psychology of forgiving enemies, thereby disarming them of their implements of destruction and rendering them powerless to possess you.
Lilies--Love of beauty
need of necessities of life for all classes. Loaves and fishes.
appreciation of craftsmanship and quality. 'Casting lots for his garment'
Anger for righteousness--money lenders in temple"

There is also a poetic discussion of Yeats, apparently copied into the book from something she wrote in 1962; more aphorisms; and  the beginning of what appears to be a screen play pitch. And two essays on her meanness--about her behavior on two occasions, things  she felt guilty about her whole life. Some of the items were written when she first had the book, but there is an entry dated 1990. And there is no clue of the date of the last entry.