And Now For Something Completely Different

I confess it--I have always been a political junkie. Even as a child, I was interested in politicians and their campaigns. When I was seven, I became a Democrat. It happened like this: My grandmother--Bam Bam--was a local chairperson for Wendell Willkie during the 1940 campaign (remember, Willkie ran against Franklin D. Roosevelt; you don't remember? I do...sigh). It was Halloween, and I was parading around the playground at Whittier School in Berkeley, dressed in a charming black cat costume complete with long tail. I was carrying a small jack o'lantern, balancing it on my head between my black kitty ears, and pinned to my suit was a huge Willie campaign button. One of my schoolmates took umbrage to my politics, and grabbed my pumpkin and smashed it to bits. That's when I became a Democrat.

Until Next time--Nan
Posted by Nan at 5:14 PM No comments:

This Is What I Strive For

My friend Ami is super organized. She lives in a two-bedroom condo, and has turned the smaller bedroom and closet into her studio. I am constantly amazed by her ability to absorb new supplies and class materials (she takes a lot of online classes, and keeps notebooks for each one).

For my contribution to Julie Fei-Fan Balzer's blog ( http://balzerdesigns.typepad.com ) during Organization Week, and my own blog here, I emphasized the concept of "Like with Like." Ami organizes her stash this way, too. But she is much better at Putting Things Back than I am. Her studio is not very big, but it has a nice picture window and a good-sized closet. She keeps her work space under the window; it rests on top of a wood cabinet (obviously hand-made) that her husband got in a sale of unwanted items at work. It had a couple of drawers missing, but Ami's son Matt is a cabinet-maker, and could whip up drawers to fill the gaps; Ami decided to use the space to hold some of her binders instead. She has a big board to work on, propped up to make it high enough, and this holds the stuff she uses most and whatever project she is currently working on. Next to that, she has a flat file bought at a garage sale years ago that holds lots of different supplies.
On the opposite side of the room are book shelves, where Ami keeps her collection of binders, CDs, and boxes to hold papers, stencils, and other things.
The closet wall has a row of Iris Carts that hold everything from rubber stamps to stamp pads to brads, and on top of these are more binders for acrylic stamps.
Notice how everything is carefully labeled. Sometimes the labels fall off or come loose, though. Ami says she doesn't worry about that, at she can always stick them back, and if they were more permanent, they would be difficult to change.
In the closet are more Iris Carts, a big wooden cupboard with shelves, and lots of hanging storage for papers and fabrics. Magazines line the closet shelf.

On the closet door and the back of the door to the room Ami has hanging vinyl pockets that hold decorative scissors, tape, brayers, and other odd-shaped supplies.

Of course, none of this would work if Ami were not scrupulous about returning things to their proper place when she has finished using them She knows exactly where everything is, all the time, and if she forgets, she can always read the label.

The fourth wall holds Ami's computer and computer-related tools like her printer. She does a lot of digital art and attends many online classes and webinars, and so this area is where she spends a lot of time.

But back to the window wall, with that wonderful cabinet. Here are some shots of the cabinet's contents:

And a look inside the flat file shows again how organized Ami is!


Did I mention that Ami's wooden cabinet is a treasure? I am thinking how cool it would be to build one for myself one day. How hard could it be? If only I had a place to put it! 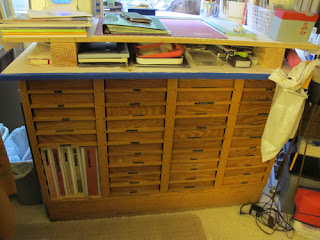 Thank you so much, Ami, for letting me share your wonderfully organized space with others through my blog, and for taking pictures of the cabinet for me. I am so looking forward to all the super art you will be making there!


Until Next time, Nan

First off, I have to confess that I am (constantly) in the process of sorting and revising and planning my art-making spaces, so what I say now may be different a year, or even a week, from now. Art Requires Inventory, and I have a lot of inventory to deal with. Those who have seen it know that my inventory is pretty extensive. That's because I do Too Many Things, and need Too Much Stuff. So everyone was astounded that I would agree to do a guest blog post for Julie Fei-Fan Balzer at http://balzerdesigns.typepad.com on Organization. Well, maybe not astonished so much as hysterical with laughter. Trust me, I do know how to organize. Really I do. But knowing how and acting consistently on that knowledge are two different things.
Because I teach, I have lots of duplicate supplies, and I try to keep the stuff I use for sharing in class in a different place than the stuff I use every day. So I am going to concentrate here on my Grand Plan to work with the things I want to use every day, more or less.
Like with Like is the organizing principle (the corollary is: Put It Back). I determine what goes into each category by choosing the most useful (to me) characteristic. For instance, I could put all my pens under the rubric “PENS,” but I have all kinds of pens, and if I put them all together I would be rooting though a mountain to find the one I want. So I have a drawer for alcohol-based pens like Sharpies and Bic and Tūl (but not Copic—they are a class unto themselves). I have another drawer for drawing pens, like Pigma Micron and Faber-Castell and Copic technical pens. I have a drawer for gel pens, and I put my Spica pens in with them as I would use them for the same purpose. I keep my professional pens and Pilot parallel pens in a plasticshoebox, and my Tria and Prismacolor markers in a divided plastic storage box, sorted by color range.Labeling storage places is essential. Otherwise, how would you know where to Put It Back?

I have special cases for my Ranger Adirondack Paint Daubers, a plastic box for my Ranger Crackle Paint, a plastic tackle box for my Distress Ink Pads, a wooden box for my Adirondack Color Wash and another for Ranger Distress Daubers. I keep a couple of Perfect Pearl misters in the color wash box (spray with spray), some small containers of  Glossy Accents and Claudine Helmuth’s Matte Medium, and a couple of empty spray bottles. And things have to be very portable, because I take them with me to ArtWorks in Edmonds, Washington, where I teach and there is an open studio most Fridays. My acrylic paints are presently all over the place, at home and at ArtWorks, so that part of the Grand Plan is still in flux. Right now, most of them are in clear plastic containers in the garage, from where I can load them easily into the car for travel. Or bring them in to work at home. A plastic storage box holds my stick pastels and oil crayons, and another my Martha Stewart Craft Paints. The above supplies I keep handy, along with my Art Journals, because I use them all the time.
Paper is always a problem. I make books, so I need lots of different kinds of paper, in lots of sizes. Also, I collect Japanese washi, and I have many, many pieces of that, from parent sheets to scraps. I keep my collection of quarter sheets of washi in a large portfolio, and scraps in a small photo album. Parent sheets and half sheets are grouped on skirt hangers, the plastic kind with two clips, and hang over a door. The washi I use are separate from the ones that go into the collection—or, I will cut a quarter sheet off and put it in the portfolio, and use the rest.
I have a real problem with irregular sizes of paper, like long strips for accordions and tabloid size cardstock and book paper. So far I haven’t found a convenient and easily accessible way to deal with those. I just sort of lay them gently on top of whatever paper stack seems handy to hold them.
There is a whole room of racks that hold 8-1/2 x 11 paper, ream upon ream in the basement. My husband made the racks from pegboard and dowels, and they sort of manage to do the job of holding boxes of paper. I try to keep each kind of paper labeled. So “Like with Like” doesn’t always work, what with cardstock and text weight and glossy and different colors. So I make sure the labels are visible.
For most people, I suggest the skirt hanger method for parent sheets, keeping the different kinds, like lotka and kozo and printmaking and decorative on separate hangers. Smaller pieces can be organized by type, and further by color range within the type. Open file boxes with hanging files and file jackets for each color type might work, if you have the space. I have a couple stuck under tables in my workspace, but because I don’t see them, I rarely think of them. And 4x6 or 5x7 photo albums are good for the tinier pieces too wonderful to throw away. For reams and partial reams, a literature sorter will do the trick for most people.
Rubber stamps, both wood mounted and unmounted, are right now kept in cardboard boxes, sorted by manufacturer (mostly—there are several boxes menacingly labeled “To Sort.”).  Acrylic stamps are in binders and boxes. I try to keep those according to type: alphabet, design element, holiday, etc. I keep some, like my Tim Holtz stamps and my Character Construction stamps in their own category, and with Tim, I have subsets for holidays and ATC-sized images.
So in planning, take stock of what you have, put and keep things that have a similar use together. When I started out to get things under control, I wrote out a Master Plan: I made a list of categories and then listed what I would keep in each category, and then decided where each category would go. It wasn’t engraved in stone, and I do keep revising it, but at least it gave me a good place to begin.
I could go on and on—but I won’t. I will say that putting Like with Like won’t work for very long if you don’t Put it Back. That’s my biggest downfall—I gather things into a bag to do a particular project  at ArtWorks, for instance, and when I bring the bag home I just set it down and procrastinate putting things back. Don’t follow that example, please—it means you can’t find something when you want to use it. And being able to use it is the whole idea!
Next time I will share with you my friend Ami's studio; what she can crowd into a small condo bedroom with closet is mind-boggling! She is the model I strive to emulate. I just wish I were better at striving!
---Nan
Posted by Nan at 8:50 PM 3 comments: