It Was About This Time Of Year

My mother called from California and asked me what I wanted for my birthday (in June). It was 1970--seems like forever ago, now--and I had just finished a major qualifying paper for my PhD on Space and Perspective in Art. So I said, "I want to go to Europe and see all the art I've been writing about in the flesh--pictures are OK, but I want to see if my ideas and conclusions were right." I expected my mother to say, "That's nice, dear. But what do you want for your birthday?" Instead, she said, "Fine. Where do you want to go?" In for a dime, in for a dollar, I thought, and told her. "Greece," I said, "Athens; and Florence, Italy, and Amsterdam and London." "All right. When do your classes end?" I told her. Next thing I knew, she had had Cook's Tours plan our trip--to Greece, Italy, The Netherlands and England. I have always regretted not throwing in Paris and Berlin; but she threw in Copenhagen, a place she wanted to go. Fair enough. The only problem with the trip was that Cook's, who should have known better, considering it was supposed to be a study trip to see musea, had us traveling on weekends and having our first full day in a city on Mondays; back then every museum in the world was closed on Mondays, and in Amsterdam they were closed on Thursday afternoon, too. But it was a fabulous trip, and took six weeks. I was happier than a pig at high tide or a clam in clover. Even with museums closed on Mondays; churches were not, and there were lots of those to see, too.

We started in Athens. Mother took a cruise from there to the Greek Islands, but I stayed behind to explore the ruins of the Akropolis and the Agora and the National Museum. One of my professors had arranged for me to meet a friend of his who was kind enough to show me Piraeus and other places in Attica, and to celebrate my birthday, drove me to Corinth to see the ruins there.

This is what I missed by not going on the cruise: Mother in Lindos, riding a donkey. And obviously having the time of her life. 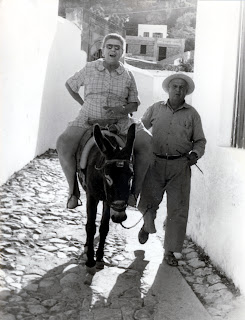 I, on the other hand, was having the time of MY life back in Athens. Chris, my professor's friend, was a wonderful host, and took good care of me. He was also fluent in English, and knew quite a lot of Greek history, too.  I wrote a poem about my birthday trip.

Autobiographical Note
We drove to Corinth on my birthday,
passing Salamis; you explained
about the Persians and the Old Greeks
and how they fought a battle there.
You chatted on, not guessing
my silence was not just attentiveness.
I knew the names, had heard the tales
before; these and other stories
of heroes, splendid and victorious, not all historical.
You and I are friendly strangers;
I do not expect you to know
that wherever I have travelled
I have been coming here.
I am one with rocky places near the sea:
my spirit, like a stubborn poppy, clings here
nourished by what exists in the memory of these stones.
I cannot promise you will understand
or share with me these visions;
still, from our separate ways
of looking, while we look together
you perhaps will recognize
that wherever I have been
I have been here.
It was published in a journal called Swift River. Whenever I give a poetry reading to a new audience, I include it as my first poem. It really tells a lot about me. I have written many poems about Greece and the Greeks, ancient and modern, and often put them into chapbooks, which gives me a chance to practice my book making skills.
Here's another one of my favorites:
Being among the Lacedaimonians
I asked about the Spartan boy
who let the fox gnaw him apart
beneath his scarlet cloak
while he stood silent.
Was that right and good to do?
I wondered, and they said
even with his guts spilled out
and half chewed, even like that
he represented all they thought noble and fine.
But they couldn't explain why it wouldn't be better,
even for a Lacedaimonian,
to kill the fox.
And another:
Oedipus at Kolonos
Not only by a pointed instrument
does self-inflicted blindness empty eyes;
but by the flatness, dullness of the life
that presses forward on a tiresome road,
unbending and unsearching, neither left nor right
appealing to the senses. Not to find
what lies on every hand to be discovered,
tasted, savored honey-sweet or bitter,
must be in fact more terrible than dark,
more dreadful than to journey on by sound
and follow patterns made by sticks that tap
before, and conjure images of smooth round stones.
That's it for now.-- Nan
Posted by Nan at 12:50 AM