Tonight is the first candle of Hanukkah, tomorrow is the Solstice, Sunday is Christmas, Kwaanza starts after that, Las Posadas comes right after New Years, and folks are STILL complaining if you say "Happy Holidays!" Doesn't make any sense.

I am happy to celebrate them all! Each of them is important to some group or other, and some of them are important to several groups. So why the fuss? While I agree that it looks like the "Holi-" part has become more like an excuse to sell stuff than to rejoice in the season for its own sake, I believe one can take it upon oneself to remember what we are celebrating for.

Way back when, the Solstice was THE holiday--it meant the Sun was coming back to make the days longer and the crops grow. This is a holiday worth celebrating. What if the Sun stayed away? Let's not take a chance--light that Yule log, and put all those decorations on the tree! I'll bet there were songs, and an admonition to give alms to the needy. And lots of parties. It was such a good holiday, some Christian got the idea to move the celebration of the birth of Jesus to coincide with it. And adopt all the fun customs, too!

Kwaanza is pretty new, and I don't know much about it; I am willing to celebrate it, though! I think the message of Kwaanza is ecumenical, and I approve.

Las Posadas is celebrated up to the 6th of January. It celebrates the search for lodgings in Bethlehem, the birth of Christ and the journey of the Magi and their gifts. I am all for those Magi--and don't forget, at least since Ahmal and the Night Visitors, one of them was black!

Call me silly, but I still believe in Santa Claus. Not because he brings presents, but because he personifies the spirit of giving, and the reason one wants to give--Love. These days my Santa gets sort of run over by the more commercial Dude, but I still maintain that he is real, and active somewhere.

A couple of weeks ago I started to make an Advent calendar--from a kit, to be sure, but it didn't come with instructions, so I guess that made up for it. Advent is a Big Deal in some Christian churches, because it starts the week before Christmas. Most calendars I've seen feature Santa Claus in one of his many guises, along with some angels, reindeer, and other symbols associated with the season. My kit had 25 chip board pieces to make into open boxes, and several tabbed pieces of heavy bookboard that fit into slots on a 12 by 12-inch hardboard backing. And one mysterious piece of heavy board that seemed not to belong anywhere. 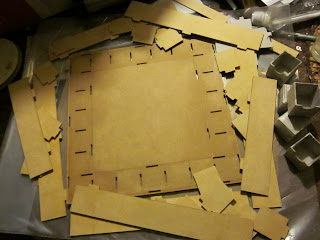 Oh, and it had a sheet of chipboard numbers. The idea is to make a calendar for the first 25 days of December, one that has hidden spaces behind each day for a small toy or piece of candy. I discovered that there were 25 boxes, but only 24 places to put them. That meant the big opening in the center was probably intended to be day 25. As I said--no instructions. So I found a piece of scrapbook paper to use for day 25. 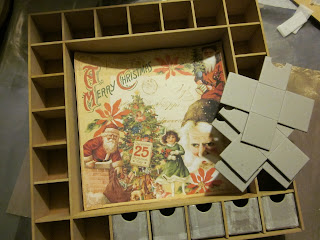 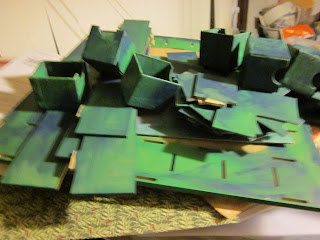 I used two colors of Martha Stewart craft paint, a bright green and a medium dark blue, and scumbled them on, mixed on the brush. I painted all the box insides, and the outside and inside of the boxes I had made already. The painting took about three evenings while watching TV. 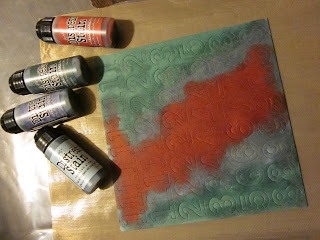 I thought the number sheet should be gussied up before the numbers were punched out, so I chose several colors of Ranger Distress dye daubers to color the chipboard. Then I gave the chipboard a coat of Golden glossy acrylic medium. When that dried, I sprayed it with Perfect Pearls bronze glitter mist. Then I painted the numbers with Ranger's Rock Candy crackle paint and when that dried and crackled, I went over it with a dark green Distress dye dauber. 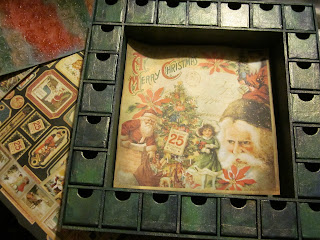 Next, I built the rest of the boxes, and painted the outside, and touched up where needed on the inside. I put the frame together, inserted the boxes, laid the scrapbook paper in the center, and sprayed the whole thing lightly with Perfect Pearls bronze glitter spray. I distressed the scrapbook paper with Ranger's seasonal Distress Blue Spruce ink pad, and while I was at it, I distressed some tags and paper that I planned to use for embellishments. The paper was from Graphic 45, last years' Christmas line. 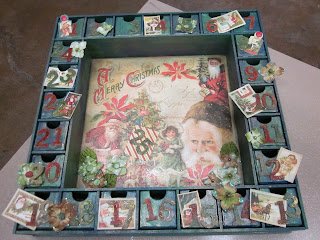 I punched out all the numbers and painted the edges with Twinkling H2O Solar Gold. Finally, I embellished the boxes with the numbers, small motifs from the Graphic 45 paper, and some velvet flowers, attaching everything with Golden gel medium. It was interesting trying to get things to fit without blocking the finger holes in the boxes. I wasn't worried about things hanging over the edges, because the boxes could still be opened in those cases.

I decorated the sides with tags and put a saying on the top. 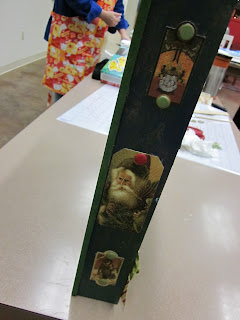 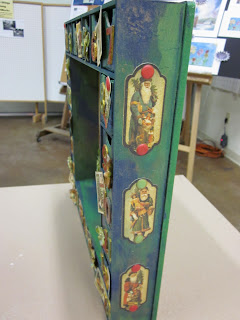 And then I was done! Except for filling the 24 boxes with toys or candies--maybe next year. While the gel medium was still wet, I took it over to my friend Brooke's store, Urban Scrapbooker, where she planned to display it.

It was a lot of work, but a lot of fun, too. Oh, and I discovered what (I think) that mysterious extra piece of board is for. It is just the right size to put under the calendar to keep it from tipping forward--because of a slight difference between the edge of the tabbed pieces and the backboard. 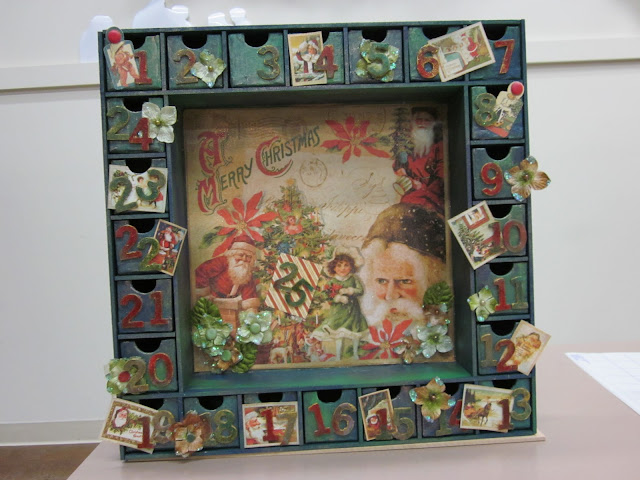 Well, I just have one more thing to share tonight: 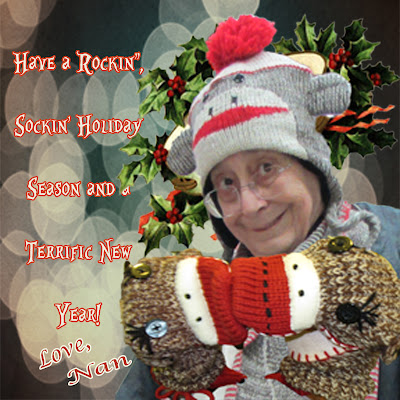